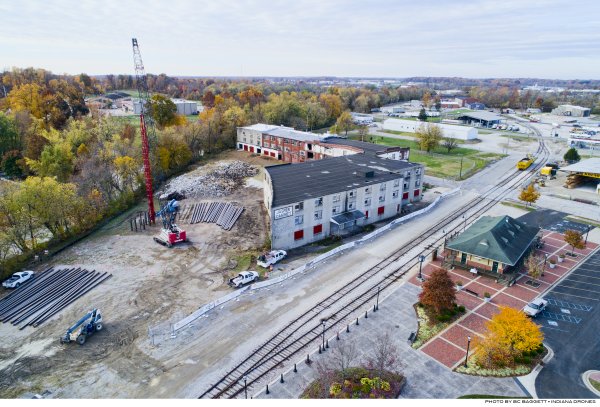 The River Centre development will sit on the old Jasper Cabinet property on the banks of the Patoka River near the Jasper Train Depot. (Photo courtesy BC Baggett)

JASPER— The clamor of construction echoed through Jasper’s riverfront area last week as pilings were installed for the River Centre hotel.

The work is the most recent publicly visible progress on the downtown development since the formal groundbreaking on the hotel component in October. Since the groundbreaking, however, work has sped along behind the scenes as developer Jane Hendrickson of Boxer Girl LLC of Indianapolis works to “button up” the site in preparation for construction to begin in mid-2018.

“We’re just doing a lot of nitty gritty, down and dirty work that needs to happen,” Hendrickson said.

The River Centre development will sit on the old Jasper Cabinet property on the banks of the Patoka River near the Jasper Train Depot. It will include more than 75 apartments, retail space, improvements to the surrounding riverbank and roads, over 200 parking spaces and the 84-room Fairfield Inn and Suites that will be managed by General Hotels Corporation of Indianapolis and is set to open this summer. Hendrickson expects to make an announcement about the tenants for the retail spaces around the first of the year. She did say that the tenants interested are a mixture of local and regional restaurant and retail businesses.

“We just want to make sure that we’re putting (tenants) in the right area and that they complement each other,” Hendrickson said.

Hendrickson has worked closely with the City of Jasper throughout the project to prepare the area for development. Most recently, the Common Council voted to vacate public utility and drainage easements on certain alleys Jackson Street between First and Second streets and all of First Street east of Main Street to Jackson Street. The alleyways are in the River Centre development. That area will be part of the 200-space parking lot that is being developed in the city-owned flood mitigation area. The vacated alleyways will become drive through access for the parking. New utilities easements will be set and maintained as part of the development.

Hendrickson announced the plans for River Centre in October 2015, and work on the development began with demolition in February.

River Centre is one of 19 public and private projects underway in Jasper. Altogether, Mayor Terry Seitz estimates the projects total over $200 million of investment in the city. Citizens can access more information about all the projects through the “Mapping Jasper’s Progress” link on the city’s website, jasperindiana.gov.