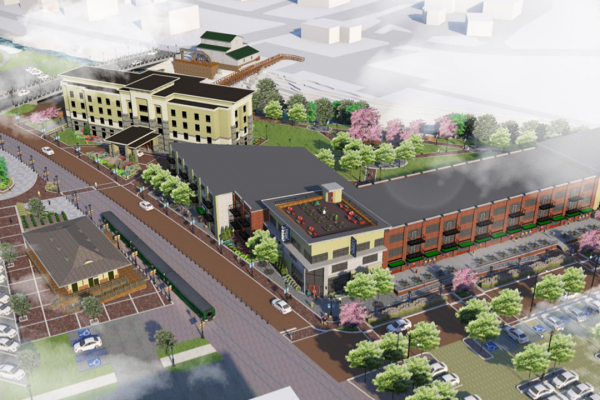 INDIANAPOLIS — Two months after demolition began on the old Jasper Cabinet building, Indianapolis-based General Hotels Corporation announced that a Mariott hotel is in the site’s future.

General Hotels announced yesterday that Marriott International, Inc. has approved a franchise for an 80-room Fairfield Inn & Suites Hotel for the River Centre development taking shape on the north side of Jasper’s riverfront. The hotel will be constructed in the former block kiln building and be an $8 million dollar investment in Jasper.

The hotel project is just beginning the design phase. Once a design is complete, it must go through Marriott, Inc. for approval. General Hotels expects to break ground on the hotel in mid or late summer, and plans to open in the summer of 2018.

Following the announcement yesterday, some Facebook commenters questioned the need for another hotel in Jasper (there are five already); however General Hotels’ market research showed a need. Through conversations with local business and leisure stakeholders, the company determined ample business travel and leisure activities throughout southern Indiana pointed toward a need for another hotel.

“We found the business lodging segment and more specifically the Marriott brand to be underrepresented,” said Michelle Laird, director of marketing for General Hotels. “These factors, combined with the excitement over the urban renewal, make this investment a very good fit for our organization.  General Hotels Corporation couldn’t be more excited about being included in the River Centre project.”

Mary Mehringer, general manager of The Hampton Inn next to the Schnitzelbank, said there is enough corporate travel in the area to keep The Hampton Inn filled Monday through Thursday. On the weekends, she said, it depends on what’s going on. When Holiday World is open, filling the rooms isn’t a problem. Local sporting events and other regional events keep the hotel filled during Holiday World’s off season. Mehringer said the Dubois County Tourism Commission does a good job of bringing people to the area, too.

“I think we have great business,” Mehringer said. “We’re thankful for whatever comes our way.”

Earlier this week, The Hampton Inn began an $8 million overhaul of their building to add 17 rooms and refurbish the existing facilities. Once both the Hampton Inn and Fairfield Inn projects are complete, Jasper will have an additional 97 rooms.

The Fairfield Inn and Suites is only part of the River Centre development. The rest of the development, headed up by Jane Hendrickson of Indianapolis-based Boxer Girl, LLC, will include retail and restaurant space, two levels of apartments and several public use projects to beautify the area.

To read more about the plans for the River Centre, click here.